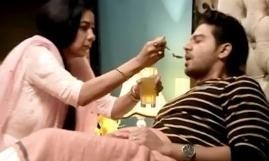 Anuj and Anupama gets an entry in the weekend home where they live with teenagers.

However Anuj falls much sick as he gets wet in rain where he cares for Anupama more than him.

Anuj shows he is much strong but unluckily he gets high fever.

Worried Anupama cares for Anuj where he makes special Kadha for him and makes him drink the same with much love.

Also Anupama does wet Patti for Anuj as he is much sick.

Seeing Anupama's pure and eternal concern for Anuj he melts down all the more.

Anuj thinks to confess that he loves Anupama a lot.

Will Anuj be able to confess his life?

Will Anupama reciprocate Anuj's love for her?