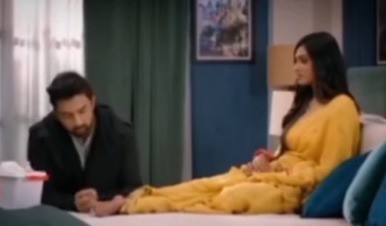 Zee TV"s popular show Bhagyalaxmi is gearing up for a major twist in the upcoming weeks.

It is known that Laxmi saves Rishi from the poisonous attack of the snake and once again manages to win everyone's heart.

However, this time Malishka is in an uncontrollable state and she goes mad at Rishi.

Shockingly, she ends her relation with Rishi and leaves him forever.

Further, Rishi too prioritizes Laxmi over Malishka and returns to Laxmi instead of convincing Malishka.

Rishi takes care of Laxmi and also apologizes to her for his rude words blaming her.

Rishi cures Laxmi's wound and thanks her for being his savior everytime.

Thus, it is a major turning point where Rishi is fully concentrated on his life with Laxmi.

Laxmi feels happy and lucky to have Rishi by her side.

Now let us see how Rishi and Laxmi celebrate their first Diwali together.

Stay tuned for further news and updates on the show.

Bhagyalaxmi: Rishi Laxmi break their fast together on Karvachauth

Bhagyalaxmi: Malishka and Laxmi compete for Rishi on Karwachauth