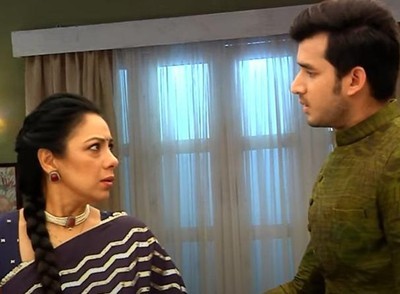 Star Plus's popular show Anupama is about to showcase some major drama.

It was earlier seen that Paritosh comes to Anupama's house and he keeps accusing Anupama and Anuj's relationship.

On the other side, Paritosh reveals that Anuj is the reason behind Anupama leaving the house which shocks Anuj.

Anuj gets angry learning this and feels that he is the problem in Anupama's life.

Later, Anuj confronts Shah's and asks them to spare Anupama and let her live.

Vanraj holds his collar and asks him to end his drama and confess that he loves her.

Anuj accepts that he loves Anupama while she stands shocked hearing his confession.

Anupama leaves the place in shock while Samar comes to console her.

Samar tries to explain Anupama that Anuj is not wrong here and also his feelings are not wrong.

Anupama will be shattered and will feel that this is wrong but Samar will not give up and make Anupama understand it.

Anupama: Oh no! Anuj decides to end his friendship with Anupama

Anupama: Oh no! Anuj decides to end friendship with Anupama ...

Anupama: Anupama to never say no to Anuj’s love

Anupama: Not Anuj, Anupama to be Anuj’s shoulder

Anupama: Not Anuj, Anupama to be Anuj’s shoulder Star...

Anupama: Vanraj ashamed blames Kavya and Baa for his actions