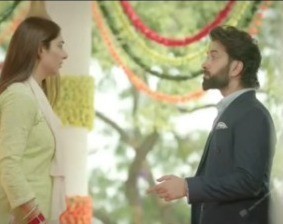 Due to Shivi's suicide attempt, Priya takes the bold decision to get them married secretly.

However, Priya's plan flops as Shubham and Nandini get to know about the plan.

They inform Ram and he reaches the temple in the nick of time and stops the marriage.

Moreover, in a fit of rage, he shouts at Priya and accuses her family to attempt to murder him.

Ram reveals Raj's misdeed and that being the reason for his refusal to the marriage.

He expresses his fear of getting his sister married into a family of criminals.

Further ahead, Ram takes away Shivi from the mandap while Priya is left shocked knowing the truth.

Priya feels frustrated that because of her father's family, Akki has to suffer.

Moreover, Shivi defends Priya by telling him her suicide attempt forced Priya to take such a decision.

This leaves Ram stunned and he is angered to hear Shivi hurting herself.

Stay tuned to know if Ram will understand Priya's position and forgive her.