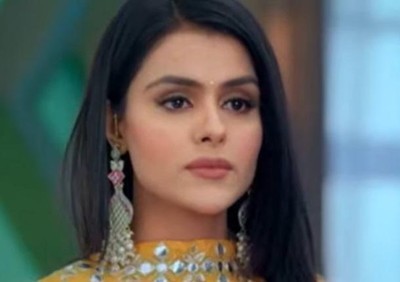 Colors' tv popular show Udaariyaan is about to showcase some major drama.

It was earlier seen that Khubeer thinks that Rupy wanted to enquire about Angad and now that everything is perfect.

Khushbeer finds out about Angad and tells Khushbeer that they should not wait and speak to Tejo.

Jasmine tells Tejo that she wanted to show that she cares for her.

Jasmine tells that it is her plan to snatch Fateh from her.

Tejo tells Jasmine that she and Fateh don't have any relation and asks Jasmine to understand it soon.

The next day, Khushbeer and Rupy come together to meet Tejo at the academy and ask about Angad.

Tejo asks them about the matter when Rupy tells Tejothat they brought a marriage proposal for her.

Khushbeer comes to the point and asks Tejo to marry Angad which shocks her.

Tejo will deny their proposal at that time but later she will agree to marry Angad.

Udaariyaan: Angad gets down on knees to propose Tejo

Udaariyaan: Angad (Karan V Grover) gets down on knees to pro...

Udaariyaan: Simran warns Fateh to learn from her mistakes

Udaariyaan: OMG!! Fateh to call off his wedding with Jasmine

Udaariyaan: OMG!! Fateh (Ankit Gupta) to call off his weddin...

Udaariyaan: Angad Maan to unite Fatejo with a twist

Udaariyaan: Fateh flummoxed about his feelings for Tejo