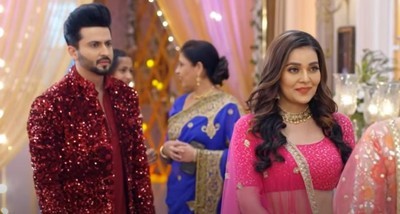 Zee tv popular show Kundali Bhagya is about to showcase some interesting twists in the tale.

It was earlier seen that Sonakshi intentionally barges into the room of Karan and Preeta to disturb them and apologize.

In the upcoming track, Sherlyn goes to meet Prithvi and she informs him that Preeta made Sanjana lie about a heart attack.

Sherlyn assures him that she will get him out of the jail.

On the other side, Rishabh comes to check on Sherlyn to confirm if she came to meet Prithvi.

Sherlyn will lie to Prithvi Rishabh saying that she went to stitch her blouse and shows the receipt to him.

On the other side, Sonakshi will wear Karan's gift for Preeta when Karan will back hug her and will learn that she is not Preeta.

Sonakshi will go to Preeta and will thank her for gifting her the dress which will shock Karan and Preeta will be puzzled.

Will this create a misunderstanding between Preeta and Karan?