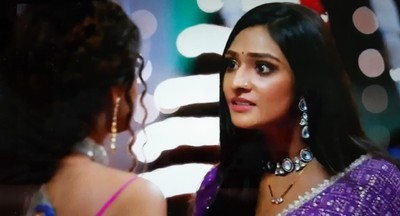 Zee TV's popular and most liked show Bhagyalaxmi is gearing up for a high-voltage drama.

As seen, Malishka comes to Oberoi House on Diwali with Viraj, a common friend of her and Rishi.

However, Viraj is quite impressed with Laxmi and tries to flirt with her which irks Rishi.

Further, Viraj questions Laxmi about the reason for marrying Rishi to which she confesses her love for Rishi.

Rishi and Malishka overhear this and once again Malishka loses her cool.

Malishka reveal her affair with Rishi

Further ahead, there will be a shocking twist as Malishka in a fit of rage bursts out at Laxmi to stay away from Rishi.

Laxmi is stunned as Malishka reveals her affair with Rishi before marriage.

Further, Laxmi gets the shock of her life while Malishka accuses her of snatching Rishi from her.

Malishka reveals the truth to Laxmi leaving her shattered.

Now let us wait and watch how will Laxmi handle this shock.

How will Rishi and his family react to this situation?

Bhagyalaxmi: Rishi Laxmi's rangoli brighten up with colors of Love

Bhagyalaxmi: Rishi Laxmi break their fast together on Karvachauth