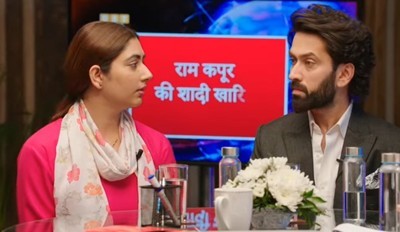 Sony TV's popular and most liked show Bade Achhe Lagte Hai2 is up with some exciting twists with the interview drama.

As seen earlier, Ram and Priya decide to give interview to prove the authenticity of their marriage.

However, at the interview as usual, Ram and Priya start arguing and this fight goes against Ram.

The interviewer accuses Ram of pressurizing Priya and demands an answer for it.

However, Priya smartly changes the case in their favor by handling the situation sarcastically.

Further, Ram too follows her path and tries to answer in a subtle way.

Moreover, in the rapid-fire round, Ram and Priya manage to smartly answer the media and score points.

Seeing Ram and Priya handling the situation by smartly supporting each other, Brinda feels happy.

Priya's family too feels relaxed but Nandini and Shubham are worried.

Finally, Nandini comes up with an intense idea to break the race.

To know what is Nandini's plan, keep reading serialgossip.com and know how Priya faces this challenge.