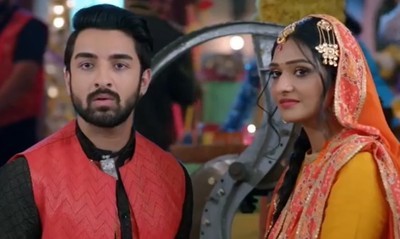 Zee TV's popular show Bhagyalaxmi is gearing up for a major drama and action soon.

As seen, Malishka is irked by Rishi's care for Laxmi and she has a huge fight with Rishi.

Rishi is so tired of explaining himself to Malishka all the time that he blocks Malishka and takes a break from her.

Further, Rishi expresses his feelings for Laxmi to Karishma Bua leaving her worried.

Rishi promises her that he would always take care of Laxmi and keep her happy.

Further ahead, he emotionally manipulates Bua and ultimately she apologizes to Laxmi for her misbehavior.

Malishka's mother warns her against Laxmi

Further ahead, Viraj invites the Oberoi family for his Dadaji's birthday.

Everyone dressed in Punjabi attire arrives for the party and has a great time.

Rishi and Laxmi dance as a couple and have a close time together that leaves Malishka fuming.

Further, Rishi praises Laxmi and spends some romantic moments with her while Malishka goes mad.

Moreover, even Malishka's mother tells her to take it as a signal and do something to get back Rishi.

Now let us wait and watch what will be Malishka's next step to win back Rishi.

Bhagyalaxmi: Rishi Laxmi's rangoli brighten up with colors of Love