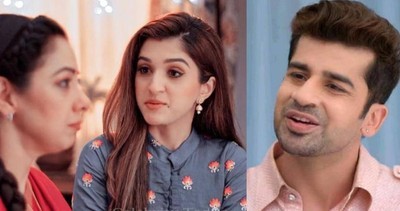 Paritosh speaks about marriage and says that one should think well before getting married.

On the other side, Vanraj also says that if they couldn't for the first time, they should think for the second time.

Later, Kinjal gets irked with Toshu's behavior and she asks him to apologize to Anupama.

Toshu refuses to apologize while Vanraj schools him for disrespecting his mother.

Toshu starts dissecting Vanraj and Anupama's relationship saying that Vanraj was never happy with her.

Samar gets angry and he objects Toshu for disrespecting his mother.

Kinjal gets furious and she warns Toshu to file a divorce immediately if he ill-treats his mom.

Anupama: Blast from the past of Anuj! New entry of Aneri Vajani

Anupama: Blast from the past of Anuj! New entry of Aneri Vaj...