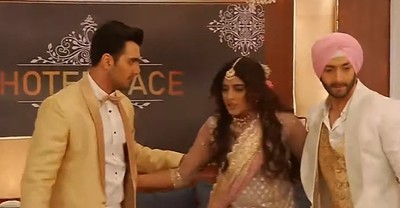 Colors' tv popular show Choti Sardrni is about to showcase some major drama in the upcoming track of the show.

Karan tells that they are getting late to unveil their family portrait.

Kulwant gets emotional and asks Seher, Karan, and Param to cut the ribbon.

They cut the ribbon and Karan gets shattered seeing the portrait.

Rajveer creates rift between both the brothers revealing their love story in front of everyone.

Seher gets upset by Rajveer's plans

Seher gets disappointed as Rajveer ruins their inauguration while Karan and Param get into a fight with each other.

Karan and Param end up beating each other while Seher tries to stop them.

Seher loses her cool at Rajveer for creating problems between her brothers.

OMG! What will Seher do now?

Choti Sardarni: Seher and Kulwant fight with the terrorists

Choti Sardarni: Seher and Kulwant fight with the terrorists ...