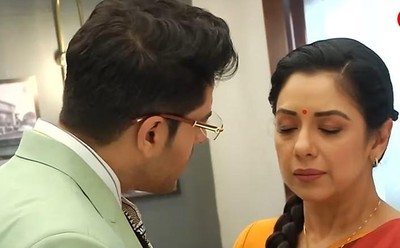 Star Plus's popular show Anupama is about to showcase the love confession track of Anupama.

Anupama fails to confess her love for Anuj as Malvika returns to his life.

Anupama is aware that Anuj is not in the space to think about himself or his life right now due to Malvika.

However, in the upcoming track, Anupama almost confesses that she loves Anuj.

Anuj and Anupama discuss during their meeting where Anuj expresses his concern for his sister Malvika.

Anupama is about to say that she loves him which shocks Anuj.

Further, Anupama praises Anuj and blushes as she was about to confess her love for him.

Anupama remains speechless and she tries to change the topic.

Anuj tells Anupama that she is blushing and her cheeks are turned pink.

Will Anupama make the move and confess love?

Anupama: Anuj lashes out at Anupama sending Malvika to Vanraj

Anupama: OMG! Kavya's nasty plan to use Malvika against Anupama

Malvika turns trouble to Anupama, all thanks to Kavya’...

Anupama: Malvika and her Split Personality new challenge for Anupama

Anupama: Malvika and her split personality new challenge for...

Anupama: Kavya asks Malvika to go back to Kapadia Mansion