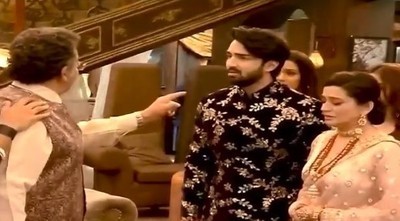 It was earlier seen that Rishi gets tricked by Malishka to marry her.

Rishi gets trapped in her game and agrees to marry Malishka.

Rishi and Malishka gets married to each other secretly when Laxmi happens to see everything.

Earlier Laxmi dreamt of losing Rishi where someone was snatching her Rishi from her.

Laxmi requested Rishi to not leave her and go but Rishi rubbished Laxmi's dream.

And now the dream has come true where Laxmi witnesses everything and is devastated.

Neelam and Rishi's father slaps Rishi for the drastic step

Neelam and Rishi's father slaps Rishi again and again where they warn him to get Laxmi back home and apologize for the huge mistake.

They want Laxmi back home and not Malishka.

It would be highly interesting to see if Rishi be able to trace Laxmi back or not.

Bhagyalaxmi: Shocking Leap Ahead! Laxmi's bombing re-entry in a new avatar after one year

Bhagyalaxmi: Big Twist Ahead! Laxmi walk away from Rishi's life