YHC: Roohi makes Rudraksh wear a saree to save him from Mukhiya's men (Latest Spoilers Alert) 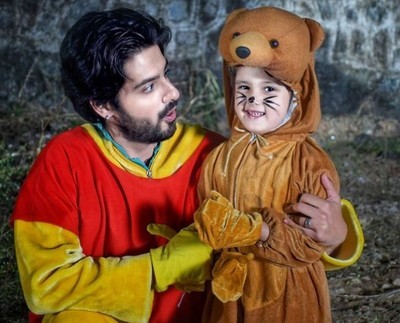 YHC: Roohi makes Rudraksh (Abrar Qazi) wear a saree to save him from Mukhiya's men

Rudraksh is currently living at Preesha's place with the help of Roohi and is unaware that Roohi is his daughter.

Rudraksh feels connected to Roohi and he loves to spend time with her.

In the upcoming track of the show, Mukhiya's men again come to look for Rudraksh.

Meanwhile, Rudraksh hides inside a barn along with Roohi.

Roohi gets an idea and she brings a saree for Rudraksh so that he can escape from the place.

Rudraksh wears the saree and he escapes from the Preesha.

However, a major drama awaits as we will get to see a major face-off between Rudraksh and Preesha.

Are you excited for the upcoming track?

YHC: Roohi gets impressed by Yuvraj plans date with Preesha

YHC: Roohi gets impressed by Yuvraj plans date with Preesha ...