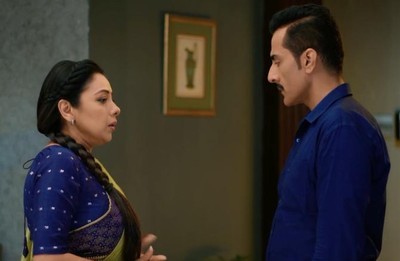 The upcoming track of Star Plus popular serial Anupama will showcase high voltage drama once again amid Vanraj and Anupama.

As Anupama stops back in Anuj's house he goes to talk to her in private.

Anuj has seen Anupama breaking down in front of him where he turned her support system in the hour of need.

Anupama thus makes one thing clear to Anuj that the day when Vanraj was here she spoke to him and clarified many things with him.

Anupama reveals the fact that Vanraj was also the biggest abuser who abused her and tortured her for twenty five long years.

Vanraj tries to justify himself before Aupama but in vain

Vanraj tries to reveal that he did not beat her nor hit her with the belt but Anupama is clear that he has cheated her and done many wrong things with her which she can never forget and tags him also the biggest abuser.

What will Vanraj do on hearing everything against him?

Stay tuned to serialgossip.com for more.