Bhagyalaxmi: Oh No! Rishi and Malishka to get engaged Laxmi fails (Upcoming Episode) 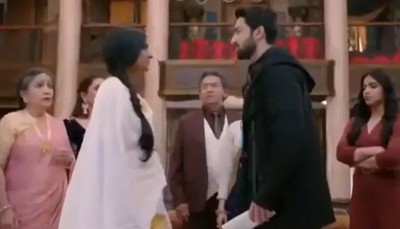 It is seen that after the face blackening incident, Malishka is all set to snatch Rishi from Laxmi.

She and her mother plays the emotional drama and instigates him to marry her.

Further, Rishi too promises to get engaged to Malishka and marry her after three months.

However, this is a huge shocker for Laxmi but she is unable to clear Rishi's misunderstanding.

Rishi is angered and all ready to get engaged to Malishka to hurt Laxmi but he is not happy.

Ayush tries to calm down Rishi and make him realize his true happiness.

Is Ayush pretending to be angry with Laxmi?

Will Ayush be able to stop Rishi and Malishka's engagement?

Keep reading serialgossip.com to know how the story will shape up further.

Bhagyalaxmi: Laxmi save Malishka from the NGO ladies Zee TV...

Bhagyalaxmi: Oh No! Rishi misunderstands Laxmi for defaming him and Malishka

Bhagyalaxmi: Laxmi in hot soup as oberois blame her for humi...

Bhagyalaxmi: Big News! Malishka tagged as 'Sautan' by the media

Bhagyalaxmi: Malishka's plan gone wrong Laxmi talk of the to...

Bhagyalaxmi: Huge Drama! Time for Malishka to walk out as her Panditji drama unveils

Bhagyalaxmi: Malishka face Rishi's wrath for her senseless a...