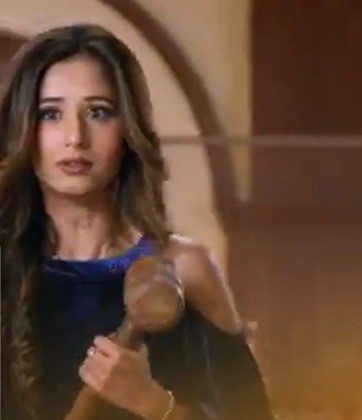 Zee TV's most liked show Bhagyalaxmi is up with high voltage drama and action.

As seen, Rishi and Laxmi are trying to save everyone from the terrorists but fail.

Further, Laxmi who is badly injured is not in a position to bear the pain any further.

In such a state, the terrorist Monish holds her at gunpoint.

Further Ahead, he warns Rishi to surrender himself or else face Laxmi's death.

As Rishi is about to rush to save Laxmi, Malishka stops him.

They argue but Rishi ignores Malishka and is determined to save Laxmi.

This enrages Malishka and she takes a shocking step to stop Rishi.

Malishka attacks Rishi on the head and renders him unconscious.

Will Malishka's this dangerous act reveal her true face in front of Rishi?

Bhagyalaxmi: Laxmi's brave act leaves Rishi safe from the at...

Bhagyalaxmi: Laxmi defeats terrorists with her wit and smart...

Bhagyalaxmi: OMG! Terrorist fire at Rishi Laxmi fail to save him