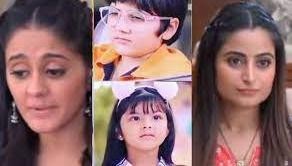 It seems that Virat will once again take a huge decision without consulting Pakhi.

He will plan to shift Vinayak’s school and admit him in the same school as Saavi’s.

This will not go down well with Pakhi as she will for the first time raise her voice against this.

She will reveal in front of Virat that he cannot take decision regarding Vinayak without consulting her.

Virat will be seen once again arguing with Pakhi and compares her to Sai as she has the same problem with Virat.

Pakhi will boil in anger and will make it very clear that she is not Sai and he should stop comparing both of them.

Virat on the other hand will make his decision clear to send Vinayak to the same school where Saavi is going.

Stay tuned for more such news and updates only on Serialgossip.com.