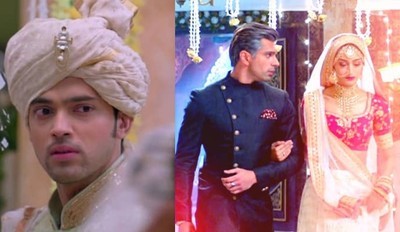 The current episode starts with the pre-wedding ritual of Anurag in Basu Mansion.

The priest stops Anurag from meeting Prerna until their marriage while this makes Anurag upset.

Anurag manages to get permission to at least talk to Prerna.

Meanwhile, here Prerna is getting ready for her marriage with Mr Bajaj.

Mr Bajaj gives 2 hours to Prerna for the Mehendi ritual, thereafter they will do other rituals and then they will arrive at Kuldevi temple for their marriage.

Anurag calls Prerna and confesses his true love for her, Prerna gets teary eyes when Anurag says that she is marrying a boring man and he will bore her a lot after their marriage that she will herself ask him to get lost.

Prerna and Anurag share an emotional moment of love on call suddenly the ladies call Prerna for Mehendi that Anurag hears them.

Anurag asks Prerna to write the initial letter of his name in her hand so that the world sees their true love.

Anurag has done a lot of shopping for Prerna, he excitedly shows all the necklace, bangles and saree to Mohini which he bought for Prerna, Mohini is really happy to see her son so much happy.

The ladies praise Mr Bajaj's choice Prerna, where after they apply Mehendi to Prerna’s hand.

Mr Bajaj’s secretary comes and shows some bangles to Prerna which Mr Bajaj especially got designed for her.

Anurag and Anupam see Nivedita getting mehendi designed on her hands, meanwhile, Tapur tells Nivedita about the dark colour of her Mehendi which will tell them about Anupam's love for her.

Anurag hears everything, he also gets Prerna's name designed on his hand where he is sure that his mehendi will come dark as Prerna really loves him.

Anurag calls Prerna where Mr Bajaj is with Prerna, while Prerna asks Bajaj to excuse her but Bajaj shows his husband right on Prerna.

Prerna confronts Bajaj and reminds him, she is not his wife yet now.

Prerna reminds Bajaj that before marriage only Anurag has rights on her and after marriage Bajaj will only get her loyalty.

Anurag excitedly tells Prerna about the dark colour of his Mehendi which reveals Prerna's true love for him.

Anurag and Prerna get busy on call while Prerna smiles for the last time.

Nivedita is happy seeing Anurag so much happy for the first time.

Mr Bajaj asks Prerna to come for their marriage.

Prerna is facing a dilemmatic time of her life, where 'Kasauti of life has stuck her amid a dilemmatic situation where on one side Anurag is waiting for her while on the other hand, she is marrying Mr Bajaj.

Ronit and Anurag get into a fight.

Ronit asks Anurag to stop Mr Bajaj and Prerna's marriage before it gets too late.

Mr Bajaj and Prerna are getting married, they take wedding rounds but before Mr Bajaj could feel Prerna's hairline with vermillion, Anurag comes and calls out Prrena.