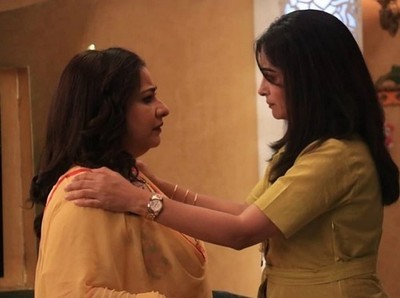 The current episode starts with Rohit takes care of Sonakshi while Sonakshi talks about her husband Rohit.

Rohit confesses his love saying maybe her husband love her but stepped back due to his family or his hand may be tied with helplessness.

They have a cute yet emotional moment of love.

Here Rohan’s friend follows Pari when Pari arrives to home after the doctor didn’t come to meet her.

Sumit comes where Rohit compels him to drive Sonakshi home and he will take care of Ranjan and will hand over him to Police.

Suman makes Sonakshi sleep while she asks Sumit to think about his relationship with Sonakshi as she is completely broken from inside and needs a support where she finds that support in him.

Sumit only thinks Sonakshi as his friend and is taking care of her.

Here Pari is on the way and gets in argument with the cab driver who has dropped her amid way.

Rohit catches hold of Pari and asks for her pregnancy where Pari misunderstands him thinking he is concerned for his brother Rohan.

They have a heated argument where after Pari leaves.

Where Pari is unconscious and doesn't eats pill, Rohan mixes the tablet in water and forces her to drink.

Thankfully Rohit comes there and saves Pari where he badly beats up Rohan.

Rohan and Rahul escape that Sonakshi and Suman come out from their building searching for Pari.

Rohit tries to wake up Pari but Pari is unconscious there comes Suman and Sonakshi who misunderstand Rohit while when Rohit bursts in anger and shouts revealing Pari is pregnant of four months.

Sonakshi blames Rohit for trying to harm Pari to save his family respect.

Pari's pregnancy finally gets revealed to Sonakshi and Suman...

Why Karan V Grover got overwhelmed with Fans response on Kah...