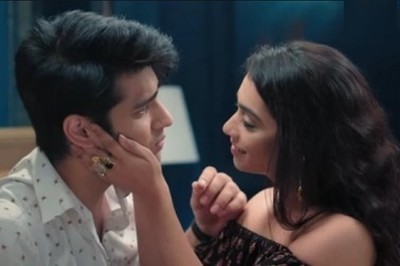 The current episode starts with Nishi shows her concern for Rohit and agrees to the Pandit that Rohit needs emotional support and they should get him remarried.

Shockingly Sonakshi blames Rohit for trying to abort Pari’s child as if the truth will come out then Rohan and Tanya’s marriage life will get ruined, but now he is acting concerned before them.

Rohit gets fed up of Sonakshi’s blame and asks her to forget her inner Parvati and be real Sonakshi.

Sonakshi questions Rohit about the abortion pills and if Pari is 4 months pregnant then she wants the child but he Rohit is trying to kill her child.

Rohit and Sonakshi get into a heated argument where Rohit questions if he tried to kill Pari’s child then why Pari hid her pregnancy from her and Suman.

Angry Rohit leaves while Suman doesn’t want them to be together.

Aakash calms down Veena while everyone is worried For Rohan.

Furious Rohit enters in house calling out Rohan and reveals shocking truth about Pari’s four months pregnancy with Rohan’s child and he beaten Rohan because he tried to abort Pari’s child.

Tanya gets angry while everyone is shell shocked.

Here Sonakshi turns to file police complaint against but Suman stops her.

Suman is worried as they will be more defamed.

Rohit reveals Sonakshi and Suman were unaware of it while Rohan tries to convince Tanya.

Suddenly when Tanya maintains distance from Rohan, she shockingly falls from stairs.

However Rohit lifts her and rushes her, Tanya starts bleeding suffering miscarriage.

Suman wants to take away Pari from here as she can’t let this baby born here or the society will blame her but Sonakshi is ready to protect Pari saying she will not let Sippys come near her.

In between when Suman goes to slap Pari, Pari refuses to go away and reveals that she will go to Sippy house and will get her baby’s right.

Rohan and the family is waiting outside the OT where they are completely shocked getting the sad news of Tanya’s miscarriage.

Veena slaps Rohan and refuses to forgive him ever while she asks him to never show his face as the God has already punished him. Where Rohan went to kill Pari’s baby, he himself lost his baby.

Rohit sits sad where Tulsi tells him about Tanya is fine while she gives sad news of Mr. Singh, who passed away.

Rohit gets worried and asks for all details and information with the reports of all infected people.

Sonakshi takes care of Suman while Suman frees Sonakshi from all responsibilities saying she should marry Sumit and start a new life as he trusts her, respects her where she has asked him about the marriage.

Sonakshi is surprised while Suman wants her to marry Sumit and forget Rohit.

Ajit gets Naren to the hospital where Sonakshi meets Naren.

While Naren holds Sonakshi’s hand, Rohit yells at her and compels her to leave while he cries.