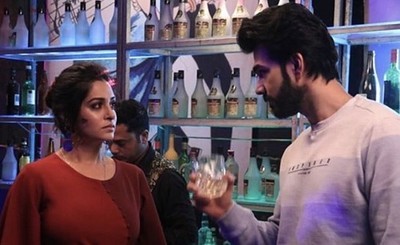 The current episode starts with Suman scolding Sonakshi for meeting Tanya after all the Sippys don’t deserve her sympathy.

Sonakshi confesses about Tanya’s miscarriage while she agrees that they don’t deserve her sympathy.

Suman asks Sonakshi to give one chance to Sumit and show Rohit that you can also move on in her life while Sonakshi confesses to her.

Sonakshi is ready to show Rohit that she doesn’t needs anyone and can move on.

Pari gets pleased and talks to her baby confessing Tanya’s miscarriage where now his dad Rohan will only think of him.

Rohit gets a letter from Health Minister and decides to meet the doctors soon.

Yash and Ajit attend the meeting while Rohit announces to treat the patient in quarantine, where he needs 16 masks while then he asks for 21 masks for Sonakshi family also.

Sonakshi gets worried for Munya who is coughinh meanwhile here Rohit asks Ajit to mention the symptoms that the disease is air borne and can spread easily.

Sonakshi meets Sumit and sees him in shorts while he asks him to wear clothes and come, they have a funny moment.

Sonakshi talks to Sumit about starting to date while she keeps on questioning as if he as a girlfriend or he has a problem that she is a divorcee while she talks about her and Rohit’s separation where he has nothing to do with her life.

Sumit is divorcee, thus they start dating right from the moment while Sonakshi calls each other, Gf/Bf while she asks him to invite her for lunch tomorrow.

Sonakshi leaves while Sumit feels weird of how Sonakshi can be so straight forward.

Veena and the family got Tanya home where Veena compelled Rohan to stay in the guest room.

Rohan tries to convince Tanya but she breaks her anger on him meanwhile Rohan gets Pari’s voice message.

Pari asks him to get married as they have their child. Furious Rohan throws his phone.

Sumit and Rohit have a talk about Sonakshi where Rohit asks Sumit to accept Sonakshi as they are good friends and understanding and he can keep her happy.

Sumit counts Sonakshi’s beauty while Rohit recalls Sonakshi, Sumit agrees to date Sonakshi but reminds Rohit to not come in between them if he falls madly for Sonakshi or it will be a fight.

Sumit and Sonakshi on their romantic date

Veena tells Rohit about Malhotra's party where he leaves while Sumit thinks about how Ronakshi truely love each other.

Sumit recalls he also got Malhotra's party invitation thus he thinks to start the affair now.

Sumit attends the party with Sonakshi and comes across Rohit, while Sumit tries to make Rohit jealous.

Sumit and Sonakshi dance romantically on song Haan Main Galat song plays... while Rohit gets furious when Sumit touches Sonakshi's hair and gets closer to her.

Sumit intentionally forces self on Sonakshi that Sonakshi pushes him.

Sumit makes Rohit and Sonakshi realize that they still love each other madly.