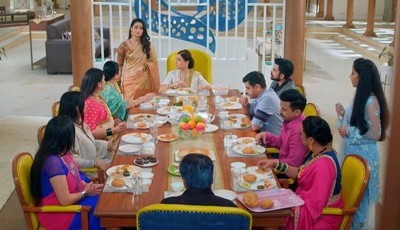 Pakhi serves breakfast for Chavan's and Bhavani praise her efforts.

Devi comes there and Pakhi asks her to join them for breakfast while Devi asks about Sayi.

Devi says that she will not have breakfast without Sayi.

Samrat asks Pakhi if she called Sayi why didn't she come.

Virat tells that that she doe not have to wait for Sayi to have breakfast with them.

Samrat asks if she is tensed because of her exams or because Virat locked her in the room.

Samrat questions them for blaming Sayi all the time.

Besides, Virat gets angry when they discuss his transfer and asks them to stop discussing it.

Sayi walks down to leave for college while Ashwini sops her and insists her to have breakfast prepared by Pakhi.

Sayi says that there won't be any wastage of food from tomorrow.

Sayi tells that everyone is enjoying the breakfast and praising their favorite bahu.

Sayi tells that they would have scolded if she or Ashwini had prepared the breakfast.

Sayi says that it won't happen from tomorrow which puzzles Virat.

Later, Sayi greets everyone and leaves for college while Pakhi says that Sayi did not like her food so she wants to have canteen food with her friends.

They again get into an argument while Sayi says that this won't happen from tomorrow.

Shivani thinks why Sayi is saying the same thing.

Devi tells Sayi that she will inform the truth about her leaving.

Sayi says it is between them and she cannot reveal the secret.

GHKKPM: Next in Hospital, major entry of Aniket post-Sayi’s accident

GHKKPM: Sayi to almost die in next huge accident

Sayi (Ayesha Singh) to meet with a lethal accident in Ghum H...