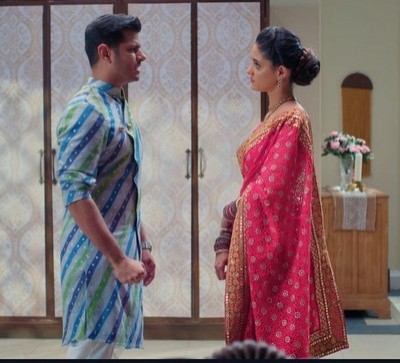 Sayi packs her back while Devi comes there.

Devi asks her where is she going and asks her to swear on her and tell the truth.

Devi asks Sayi if she is leaving Virat.

Sayi tells that she is not just leaving Virat she is leaving the family and also the place.

Virat hears Devi and Sayi's conversation and asks Virat what is going to happen tomorrow.

Sayi and Virat get into an argument

Devi tells Virat that they were talking about Ganpati pooja.

Sayi again starts arguing about Pakhi and they start fighting.

Sayi asks Virat to get an anger treatment done by a psychiatrist.

Sayi looks at her wedding ring and gets emotional.

Virat tells Sayi that the day has come and what is she going to do.

Ashwini asks Sayi what is she hiding from her while Sayi refuses to tell.

GHKKPM: Major turn of events for Virat and Sayi