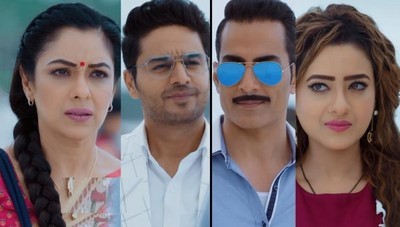 The latest episode of Star Plus serial Anupama begins with Anuj and Anupama in flight where Anupama asks him to click her picture.

Anupama wants to send the same to Bapuji.

Anupama further calls Bapuji and talks to him Kinjal and Pakhi at home.

Vanraj shares his attachment towards Anupama with Kavya.

Kavya consoles Vanraj where she can bear the attachment and nothing more.

Rohan send Nandini and his private pictures to Samar.

Samar is not bothered but Rohan wants to win Nandini back in his life.

On the other side Rohan reaches Baa where he decides to share his pictures with her.

Anuj goes to sleep where Anupama begins her enjoyment.

Later she falls asleep when Anuj makes Anupama wear his coat for the warmth and he sit beside her.

Anupama reaches Juhu Beach where she is happy and runs to catch hold of water.

Anupama and Anuj are walking here and there when they face Vanraj and Kavya.

Anupama is aghast to face Vanraj Kavya in Juhu Beach.