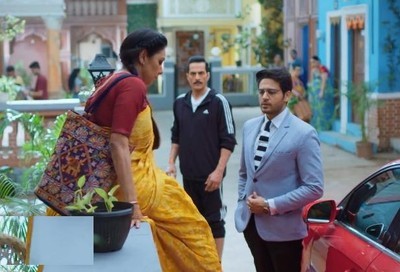 The latest episode of Star Plus Anupama begins with Anupama asking Nandini to take care of family and leaving for office.

Kavya too joins her as its her first day at work.

Kavya decides to be cool and much excited with Anuj as its her first day.

While Anuj stays cold as he is not much impressed with Kavya.

Anuj asks Kavya to discuss all her points with Anupama as she is the project head.

Kavya feels low but she agrees.

When she presents her idea before Anuj and Anupama she feels sad as Anuj listens to Anupama's key points and corrections over Kavya.

Kavya feels much humiliated where she goes out of the cabin and makes much noise before other employees.

Kavya begins her insulting drama as usual where Anuj without thinking much about Kavya fires her from the job.

Kavya in the fit of rage taunts Anuj and Anupama all the more where she vomits out Vanraj's words.

Anuj informs Anupama about one factory visit in the outskirts of Ahmedabad.

Kavya reaches Vanraj and cries in his arms.

Vanraj stops Anupama from going with Anuj for a factory visit.

Anupama jumps the fencing to go ahead with Anuj Kapadia making Anuj impressed all the more.

Anupama: Pakhi to be a major roadblock in Anuj-Anupama's relationship

Anupama: Pakhi (Muskaan Bamne) to be a major roadblock ...