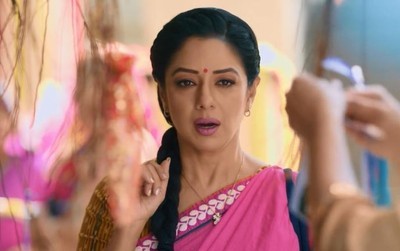 The latest episode of Star Plus serial Anupama begins with Vanraj tormenting Anupama where Anupama has ear plugs.

Vanraj gets shocked to see the same when Anupama asks him to send her voice note every day with his dialogues.

Anupama walks when Vanraj holds her and she jerks his hand.

Anupama gives a fitting reply and walks away.

Bapuji talks to Anupama and consoles her.

Anupama informs Vanraj about her going to the outskirts of Ahmedabad with Anupama.

Vanraj stops Anupaam from going out where he asks her to not return home if she goes.

Anupama jumps the fencing wall and sits in Anuj's car and goes along with him.

Anupama and Anuj reach the temple where they pray before their new start of work.

Anuj and Anupama sit for talk when girls compliment Anuj for being handsome.

Anupama is all smiles for Anuj where he feels shy.

Anupama asks Anuj why he did not marry.

Anuj asks Anupama to get married once again.

Heavy rain where Anuj Anupama's car meets with an accident.

Anupama: Upcoming romance of Anuj Anupama's night out The u...

Anupama: Baa to realize Anupama's worth after exit