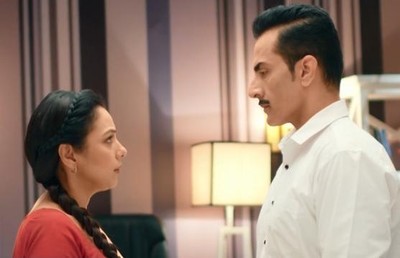 The latest episode of Star Plus Anupama begins with Pakhi and Anupama talks.

Pakhi wants to go to the US and knows what will be Anupama's dialogue but this time Anupama supports Pakhi but with a condition.

Anupama wants Pakhi to complete her studies here and then later go for further studies abroad.

Malvika is ready to go to office and asks Anupama if she is coming.

Vanraj Anuj in real argues over the business when Anuj raises his hand and decides to not interfere in Vanraj Malvika's business.

Anuj and Anupama spend some good time and their eye romance is caught by Malvika.

Anuj Anupama excuse themselves while Malvika is all smiles.

Malvika gets Rasgulla for Vanraj and feeds him when Anuj Anupama witness the same.

Anuj turns uncomfortable and walks away but Anupama decides to stay there and talk to Vanraj.

Anupama gives Tashan to Vanraj when he gives it back to Anupama.

Anupama warns Vanraj to just keep business terms with Malvika and nothing more.