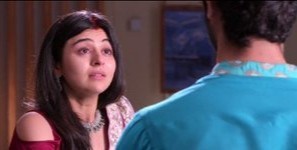 Charu gets furious and leaves to call Anubhav fit humiliating his Family like this. He says that Anubhav can't treat their Daughter in law like this.

Anubhav goes to Gungun who hugs him and cries telling him that she is all alone. She tells him that he has promised her that he will never leave her but today he did.

Golu taunts Akriti for provoking Charu against Anubhav. Garima supports him. Akriti says that she has done right by doing so. Goli and Sunanda are against her.

Charu keeps on calling Anubhav continuously while he lifts the call finally. Charu shouts at him for humiliating his Family like this.

He says that he knows that Gungun and Ridesh needs him but that doesn't mean he will stay with them leaving his Marriage.

Anubhav tells Charu that Ridesh is Dead. Chari stumbles hearing him and tells the same to his Family.

Goli says that Gungun has become all alone to which Akriti says that she has her husband and Maya. She says she cares for her.

Garima mocks her saying she wouldn't have Married Anubhav if she cared for Gungun.

Akriti sees Gungun hugging Anubhav while crying. The Kulshetras reaches there. Akriti asks her about her Husband.

She tells her that her husband and family is with her just because her husband is not there with her. Gungun gets furious and asks all of them to leave.

She shouts at the staff for calling Ridesh as a Body. Anubhav consoles her. Akriti seperates them and mocks her for hugging Anubhav.

Charu asks Anubhav to leave with Akriti. Anubhav looks at Gungun and gets sad seeing her state.

Gungun tells Anubhav that everyone has left her then why he is returning to her. Anubhav tells her that he chose her. She asks him to say what he means and he hugs her. Akriti gets shocked seeing them.

Kabhi Kabhi Ittefaq Se: Pati not Ghulam! Anubhav lashes out at his family

KKIS: Not Akriti but Anubhav Gungun to have real grah-pravesh

Anubhav (Manan Joshi) and Gungun (Yesha Rughani) to have the...

Anubhav (Manan Joshi) to stand with Gungun (Yesha Rughani) i...