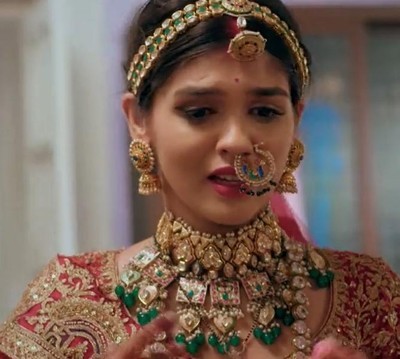 Akshara thinks that Birla's are playing pranks on them while Abhimanyu says that the matter might be something else.

Abhimanyu asks Manjari about everyone while Akshara asks Abhimanyu to not spoil the surprise.

Meanwhile, Manjari discloses that everyone left for the hospital due to an emergency.

Neil informs light has gone and the inverter battery needs a recharge.

Abhimanyu goes inside the house and he calls the staff along with led lights.

Abhimanyu apologizes to Akshara and tells her that in their profession patient is a priority more than anything in this world.

Manjari then welcomes Abhimanyu and Akshara.

Akshara then decides to perform the rituals with the family.

Akshara and Abhimanyu walk to their room and they decide to talk as they did not get time in the wedding chaos.

Abhimanyu gets an emergency call and Akshara asks him to leave.

Abhimanyu informs her that he has kept a gift for her in the room.

Akshara gets upset when she sees the room undecorated and she starts crying.

Kairav calls Akshara and she tries to hide her tears in front of her family.

Later, Kairav understands that Akshara is upset but she is hiding it from them.

Akshara tries to boost herself to accept the fact that she has married a doctor.

Meanwhile, Harsh calls Aarohi back to the hospital.

In the meantime, Akshara finds Abhimanyu’s gift and praises the bracelet.

Later, Manjiri and Neil treat Akshara with a pani puri.

Abhimanyu then video calls Akshara and informs her that he is tired while Akshara asks him to take care.

Abhimanyu then sees Aarohi at the hospital.

Harsh insults the food made by Akshara and walks away.

This leaves Abhimanyu angry as he finds Harsh disrespecting his mother too.

Abhimanyu and Harsh get into a big argument.