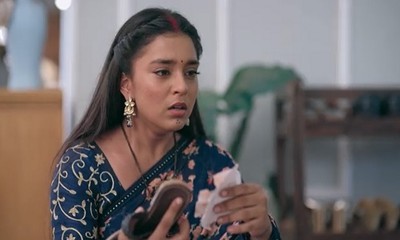 The current episode starts with Aryan and Imlie’s conversation when the former complaints about Kairi.

When Aryan gives Imlie the medicine that Madhav brought to her on the night of the sting operation, just then Imlie suddenly sees someone walking in the house wearing the same sandal.

Imlie runs after Jyoti but fails to see her. Imlie comes to the shoe rack again but fails to find the sandal.

As she prays to Sita Maiyya to pave the way to her, finally she gets hell shocked finding the truth that the sandals actually belong to Jyoti.

The family leaves for pooja when Jyoti gives her sandals to Imlie and this shocks the latter to the core.

Imlie is shaken wondering how Jyoti can do such with her.

The family and Imlie perform pooja when Aryan recall everything.

Aryan is determined to collect evidence against Madhav and so he visits the medical store to find the footage but the footage record is not there.

Imlie cries as she prays and recalls Jyoti giving her sandals to her.

Later back home, Imlie is wondering about Jyoti when she trips but Aryan saves her from falling.

Aryan scolds her for risking Cheeku’s life in her investigation to defend Madhav.

Aryan talks ill about Madhav when Imlie defends him.

Ravivaar With Star Parivaar: Anupama Vs Imlie's family to complete

Ravivaar With Star Parivaar: Anupama Vs Imlie's family to co...