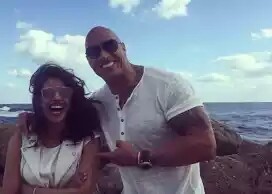 Priyanka Chopra the name which need no introduction.

Priyanka has been named among the top heroines in Bollywood.

Priyanka is a multi talented person, she is an actress, singer.

Priyanka has made her mark in Hollywood with her television series Quantico.

Priyanka has also entered the list of Oscar Presenters.

While this is not the stop, Priyanka is making her Hollywood debut with Dwayne.

Dwayne is well known for his The Rock, Dwayne posted a video introducing Priyanka and welcoming her in Baywatch family.

Priyanka reposted the video and confirmed the news.

Priyanka will be seen in the film Baywatch, the film will be directed by Seth Gordon.

Stay tuned for more exciting updates of film and television.

Priyanka Chopra will play in lead role as a Alex Parrish in ...