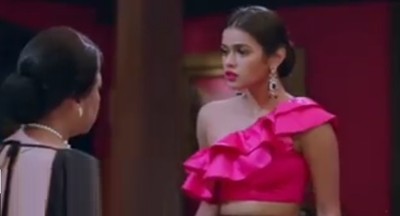 It seems Sharda and Tanvi are not going to drop guns in the daily soap opera Kasauti Zindagi Ki 2 of Star Plus.

Bajaj and Prerna's marriage relationship has become stronger with the passing time.

Meanwhile, Sharda and Tanvi are still planning and plotting to separate the couple.

Another twist in the tale comes when Sharda gets a pen drive which has the detailed plan of Basus destruction made by Bajaj.

Sharda finally tracks down of why Bajaj married Prerna.

However, Prerna was never Bajaj's target but Bajaj came in Basus life to destroy them from the roots.

Evil woman Sharda will now be planning to remind Bajaj of his prime target and that to destroy Basus.

Meanwhile, Sharda will use this secret to create ruckus amid Bajaj and Prerna.

Let see what will happen next in the story of Kasauti Zindagi Ki 2.

Till then keep reading serialgossip.com for more detailed updates.