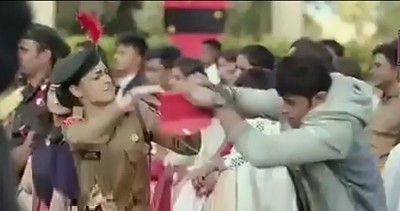 The upcoming episode of the new TV show will see Shravan and Suman’s crinzy fight over the cricket match tickets.

Suman hails from an army family where her father her grandfather is lieutenant and colonel meanwhile Shravan belongs from a civilian family.

Shravan’s father is invited in an army concert where he forces Shravan to company him.

Meanwhile Suman has tickets which Shravan mistakenly dropped while having a first fight with her.

Suman to teach a lesson to Shravan

Suman wants to teach a lesson to Shravan while when Shravan sees ticket in her hand in the concert, he steals her purse to get the same.

The fight takes comic U-turn when Suman jerks Shravan snatching purse while Shravan falls before her grandpa to whom he fooled in the cafeteria.

The cute nok-jhok of Shravan and Suman will soon start their love story as Shravan is Suman’s new neighbor and what will happen when Suman will find the truth.