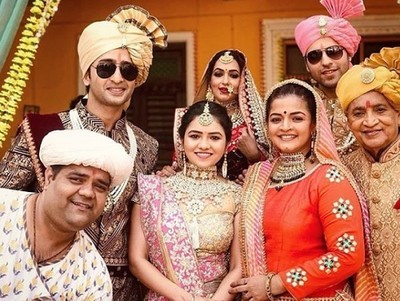 Finally its call for Abeer and Mishti’s most awaited wedding.

The preparation of the wedding is in full swing where another U-turn comes in the story when Kunal and Kuhu’s divorce truth gets revealed to everyone.

Where Kunal confesses his love to Kuhu and their issues get resolved, the family calls to get Kunal and Kuhu remarried in the same mandap of Mishbir.

However the families are happy and the couple are too, but the show lovely fans are really upset.

The fans who waited since the starting to see the grand wedding of Abeer and Mishti are really upset at Kunal and Kuhu turning spoilsport in the leads marriage.

The situation is getting intense as the fans started to protest against this wedding track where the side characters are given more importance in the show as they are getting two times married but the leads Mishbir are not even married for once.

Meanwhile Kunal and Kuhu's drama in Abeer and Mishti's Haldi and Sangeet ceremony also turned out upsetting while mehendi ceremony is no more going to happen because of Kunal and Kuhu which has added more fuel to the fans anger.

Abeer and Mishti's wedding to come true or get in dilemma

The fans are complaining to Rajan Shahi for such injustice with the love story of the main leads, Abeer and Mishti.

Meanwhile when Kuhu hates Mishti so much, will this most awaited marriage of Abeer and Mishti will come true or something tragic will happen.