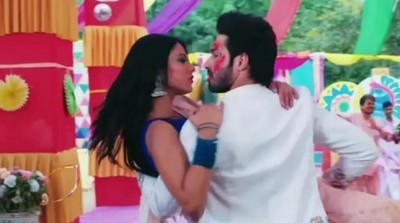 At the same time, Vish makes Dev believe that Brinda eloped with Rajat.

Dev and Brinda’s true love turns into hate story and from where the story takes leap of one year.

Dev will be celebrating Holi with his family when after one year Brinda will return in his life to win him back.

However not everything is same what Brinda left behind before leaving Dev.

Dev is now married to Shalaka where he gets romantic and plays love Holi with his wife Shalaka.

Brinda fumes in anger seeing Dev with Shalaka that she comes to Dev.

The viewers and the Naagin fans will get to see Dev and Brinda’s sensuous Holi dance breaking all old records of romance.