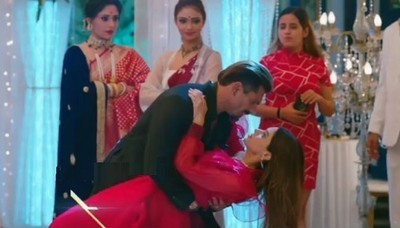 Earlier seen how Bajaj and Prerna shock the basus by making their blasting comeback in Basu house.

The love and the revenge will now get more intensified in the upcoming episode story of Kasauti Zindagi Ki 2.

Anurag Prerna’s romantic dance is already firing the screens but what grabs more attention is Bajaj and Komolika’s couple dance.

The romantic show-off leads to a major twist when Bajaj lifts Komolika in his arms making an intense romantic posture.

While Komolika gets angry, Bajaj reminds her of Anurag’s betrayal to Prerna while he spills beans in Komolika’s mind saying one day Anurag will also push her just like what he did to Prerna.

While Komolika is sure that Anurag can’t cheat her, Bajaj still gives open warning to her.

Let’s see what new twist will unfold when Bajaj has fueled Komolika’s hate and anger.

Bajaj and Anurag's major face off in Basu house behind back ...

Kasauti Zindagi Ki 2: Big task for Anurag to keep Prerna away from Komolika