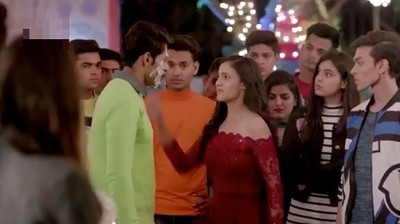 A big twist is line up in the story popular TV serial Ek Duje Ke Vaaste 2 of Sony TV.

Anish is cooking something fishy against Shravan after Devik Suman and everyone is impressed from him and is ruling in the school.

After all Anish is an army brat, he is unable to digest Shravan being a civilian has impressed everyone.

Thus Anish makes a plan and there he invites Shravan in his birthday party and that through Devika.

Devika insists Suman to get Shravan in the birthday party while when Shravan and Suman arrive in Anish’s birthday party, there is a huge drama pre-planned.

On one side Shravan has realized his love for Suman and is on the way to make a confession.

A major misunderstanding messes up everything in the birthday party.

Shravan and Suman face off where angry Suman shockingly slaps Shravan in front of everyone and Shravan’s heart breaks when he doesn’t get a chance to prove his innocence.

Let’s see if Shravan could prove his innocence before Suman to get wrong thinking of Shravan.