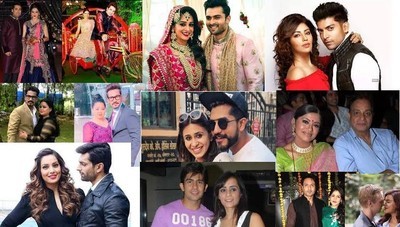 Keeping the society norms aside all these celebrities did inter caste marriage as their love for each other was true.

There are many things which we want to see in our better half before marriage but at times things does not work as we want and we fall in love finding the person perfect in all way.

Here are such examples of couple who did inter caste marriage.

Bharti Singh and Haarsh Limbachiyaa have promised to live together for seven births even though they come from different caste.

Debina Banerjee and Gurmeet Choudhary got married and till date they give couple goals.

Aashka Goradia and Brent Goble were dating each other since long time and duo got married where Aashka is Indian and Brent in American.

Both of them got married as per Hindu and Christian rituals.

Iqbal Khan and Sneha Chhabra met on the sets of Falguni Pathak music studio. They exchanged their contact number and later fell in love. Post which the duo got married keeping caste barrier aside.

Suyyash Rai and Kishwer Merchant also came together from different community and got married giving couple goals to everyone. The duo got married in court and later organised party for close friends.

Hussain Kuwajerwala and Tina Darira also got married in both Muslim and Hindu style and till date they are happily married couple.

Sudha Chandran and Ravi Dang fell in love at first sight and the duo got married where Sudha is Tamilian and Ravi is Punjabi.

Dipika Kakkar and Shoaib Ibrahim got married where Dipika is Hindu and Shoaib is Mulsim. Post marriage Dipika converted into Muslim where people were unhappy with her change. But still the duo got married and are very happy with each other.

Aamna Sharif and Amit Kapoor got married in year 2013 where Aamna comes from Muslim community and Amit is Punjabi. The duo got married and living happily together.