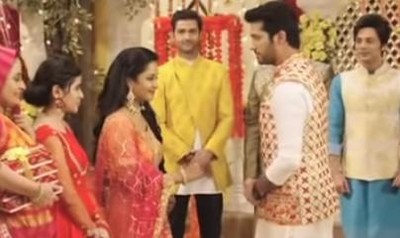 It was earlier seen that Pratibha choose Vidhi for Ved but Ved falls in love with Vidhi’s sister Payal.

Pratibha is unaware and asks Ved to make Vidhi wear the bracelet with love leaving him shocked.

Vidhi suspects something wrong with Ved seeing him unhappy with development.

Ved too remains quiet as he does not want to spoil the fun.

At last after everyone leaves, Ved cannot stay unhappy for his entire life.

Shockingly Ved unfolds the truth before entire family members that he loves Payal and not Vidhi.

What will Pratibha do now?

Will Pratibha cancel Vidhi and ask Payal to marry Ved?

Let’s wait and watch for the next new drama in serial Aye Mere Humsafar.