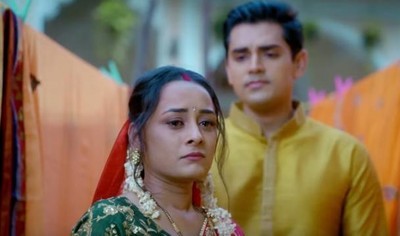 Star Plus serial Saath Nibhana Saathiya 2 will showcase interesting twist and turn from the very beginning itself.

It was earlier seen that Anant feels bad when they treat servant Gehna mercilessly in their house.

While Anant’s Bhabhi asks Anant to marry Gehna and make her Bahurani from Naukrani.

Anant falls in major dilemma and to stop injustice against Gehna, Anant gets married to her.

Post marriage too Gehna is treated just like mere servant and everyone orders her to do work.

Gehna is seen much upset as she does not want to burden herself from work.

Anant comes and stops Gehna where he reveals that she is not more servant but Choti Bahu of their family.

Will the family members accept Gehna as their Choti Bahu?

Saath Nibhana Saathiya 2 New Promo: This is how Anant (Harsh...

When Rasode Mein Kaun Tha to return back with Gehna Bahu not...