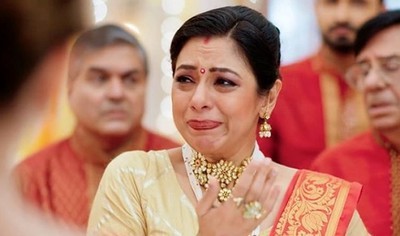 When Vanraj and Anupama are getting remarried,

Here Vanraj and Kavya are also planning to get married.

Things take drastically troll when Nandini reveals the truth to Paritosh and Paritosh gets pissed off knowing his father’s such evil deeds.

Paritosh always favours his father but not this time as this time Vanraj did such a disgusting deed which is completely unacceptable.

Kavya who is not any abla-naari* raises voice against Paritosh’s such mentality for questioning her instead of his father.

Kavya even clarifies to Paritosh that she is not having any one-sided love for Vanraj but Vanraj is himself involved with her.

This much drama wasn’t enough that Kavya now swears to send Vanraj jail along with her if he thinks she is wrong.

Kavya compels Paritosh to call Police and expose everything and himself find that his father too loves her and she is not playing any trick on him.

Next in Anupama, another major drama is line up in the story as Kavya and Vanraj have a fight.

Vanraj is completely mad at how Kavya’s carelessness has led to a big problem.

Vanraj is now trapped amid Devika, Sanjay, Nandini and Paritosh who are very well aware of his extramarital affair.

This is getting highly intensified to watch what more dhamaka is line up in Anupama because Vanraj has a warning for Kavya.

Anupama: Anupama (Rupali Ganguly) to slip in trauma on her w...