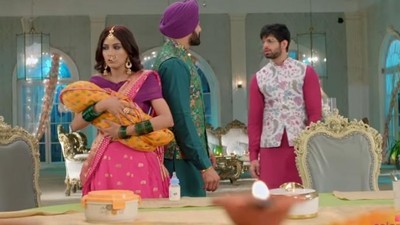 It was earlier seen that Manav wants Karan back.

Manav gets blackmailing Sarabjit that he will not take good care of his sister Aditi if he refuses to return Karan.

Sarabjit and Meher are adamant to keep Karan with them only.

While Manav is also adamant and he crosses his limits.

Manav declares that he will do Meher's character assassination if he refuses to give Karan.

Manav wants to ruin Meher's reputation completely and inform about her illegitimate child to one and all.

Manav wants Meher and Sarabjit to face all the humiliations.

Sarabjit and Meher still stick to Karan and make Manav away.

Choti Sardarni: Manav blackmail Sarabjit to giveaway Karan or else he will divorce Aditi

Choti Sardarni: Kulwant advice Meher to give away Karan and save marriage with Sarabjit