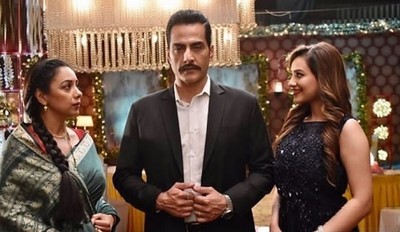 Indian television series Anupama, the top TV serial of Star Plus has triggered the male system of Indian society.

The patriarchy which has always been a stereotype and an unbreakable rule of society is intriguingly been challenged by Anupama in the show Anupama.

The terrible reasons why so many men hate Anupama TV serial and have negative reviews about the show clearly depicts how at some points in their lives, they have been Vanraj intentionally or unintentionally.

Often the guilt in the heart becomes the cause to refrain from certain things and here comes Anupama.

After how Anupama is rising high and her courage is giving a tough fight to Vanraj's male ego, Vanraj is left all alone to fight his mental battle.

Vanraj is burning in the fire of his male ego which Anupama just now crushed under her feet by stopping Vanraj's hand from slapping her or torturing her anymore.

Vanraj whose extramarital affair and his egoistic attitude to not let his wife succeed or rise high above him turned Anupama into a silent storm has provoked the men of Indian society,

The women society is being inspired by Anupama's courageous fight against Vanraj.

The reason why women love Anupama is that Anupama's life is quite relatable to them and her story is a visual representation of what happens behind the closed doors of most Indian households.

Undoubtedly this is 2020 and women have started to work and are fighting for their rights, but only a few of them have successfully made it.

Even today, women are expected to do household chores and kill their dreams which is quite hard for those aspiring women who either end up getting tied in chains of male ego or get betrayed on their back by their husbands just like what happened and is happening in Anupama.

The series Anupama is doing very well on the screen with its amazing star cast and storyline.

We hope every woman fights back the injustice like our aspiring Anupama.

Anupama: This is how Vanraj and Kavya planned to break Anupama

Anupama: This is how Vanraj and Kavya planned to break Anupa...

Anupama: Time has changed new twist with Anupama in between Vanraj Kavya