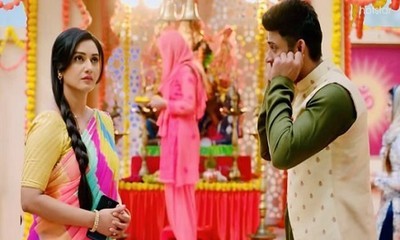 Star Plus serial Shaadi Mubarak is looking forward to the Switzerland track.

KT and Preeti get Neel and Priyanka married which upsets the family.

Kushala and the family reveal about the huge business loss which they planned to cover up with the dowry money.

KT and Preeti take the decision to save their family business with the help of their Shaadi Mubarak.

However, there is a twist because a mystery man has entered in Preeti’s life.

Preeti’s secret meeting behind back KT

KT gets angry at Preeti and enquires about the man but Preeti reveals nothing.

Preeti instead asks KT to not interfere in her personal matters.

Preeti even rushes to Switzerland to meet the man as he is the one who is helping Preeti.

Preeti visits Switzerland to meet the man behind KT’s back and when KT finds this, the situation deteriorates badly.

KT and Preeti’s relationship is now at stake because KT guesses that the mystery man is Preeti’s ex.

So, what new twist will unfold next in KT and Preeti’s life?

To know this, make sure you check out SERIALGOSSIP.COM for the new updates.