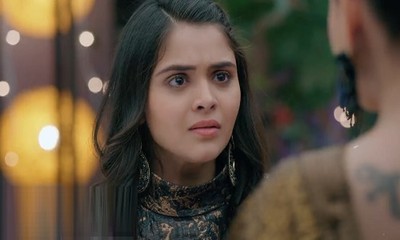 The upcoming episode of Anupama TV Serial will see huge drama on Vanraj's birthday and Pakhi taking a suicidal step.

Vanraj is super happy to celebrate his birthday with his family.

Kavya is also enjoying with Shah's family but she has some ulterior motives behind uniting Vanraj with his family.

Kavya is determined to ruin Anupama and kick out Baa and Bapuji from home after marrying Vanraj.

Pakhi realizes Vanraj's happiness with Anupama, while his negligence towards Kavya.

Pakhi warns Kavya to stay away from her father because he is not happy with her.

Kavya taunts her saying Anupama failed to stop her then how can she (Pakhi) stop her.

Furious Pakhi pours the cold drink on Kavya's face and this worsens the situation.

Vanraj bursts out at Pakhi hurts her badly

Kavya uses this situation as a major opportunity to manipulate and instigate Vanraj against Pakhi.

Kavya creates huge drama and accuses Pakhi of intentionally hurting her when she was only caring for her.

Vanraj doesn't inspect Pakhi and lashes out at her for hurting Kavya.

Poor Pakhi feels insulted and hurt by Vanraj who trusted Kavya, not his daughter.

Consequently, Pakhi takes an extreme step of committing suicide after seeing Vanraj's concern and his care for Kavya.

Will Vanraj and Anupama be able to save Pakhi before it gets too late?

Check out the whole story at SERIALGOSSIP.COM

Anupama: Kavya marries Vanraj to throw out Family Star Plus...

Anupama: Kavya butters Anupama with an ulterior motive In t...

Anupama: Vanraj ignores Kavya to cut cake with Anupama The ...

Anupama: Kavya sits in pooja with Vanraj and Anupama sidelin...