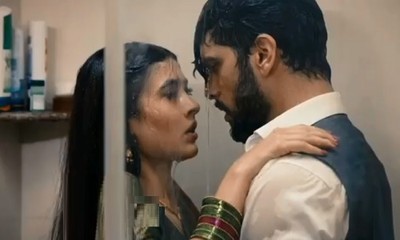 Pallavi gets a big business deal because of Raghav and thus decides to thank him.

When Pallavi bakes a yummy cake for Raghav and surprises him when he returns home,

The latter gets shocked realizing Raghav is badly drunk.

Poor Raghav is heartbroken recalling how he has been a bad man in Amma and everyone's life.

What Pallavi does is what brings Raghav and Pallavi closer in love like never before.

Pallavi grabs Raghav's hand and takes him in the shower.

As Pallavi pushes Raghav into the bathroom and stands him under the shower, Raghav surprisingly pulls Pallavi and hugs her strongly.

Pallavi stands stunned when Raghav looks intensely and passionately at Pallavi while they both get wet under the shower.

With Pallavi becoming Raghav's partner in pain, how promising Raghav and Pallavi's love story is going to be is worth watching next in Mehndi Hai Rachne Wali.