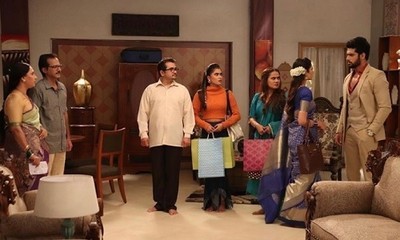 Star Plus TV serial Mehndi Hai Rachne Wali is about to see an interesting drama in the storyline.

So it is seen that Vijay Deshmukh gets trapped in theft case of Raghav’s most expensive diamond necklace.

Though Raghav is innocent, Vijay blames him for trying to defame him.

However, here what Pallavi does is what comes as a huge surprise to Raghav.

Raghav and Pallavi turn each other support

Interestingly, for the first time Pallavi defends Raghav against Vijay and her family.

This time Pallavi shows her trust in Raghav and this is what leaves Raghav all blushing.

Where Raghav and Pallavi’s love is becoming stronger with every passing day,

Vijay Deshmukh is quite frustrated at Pallavi defending Raghav.

It would be interesting to watch how soon Vijay will start to trust Raghav.