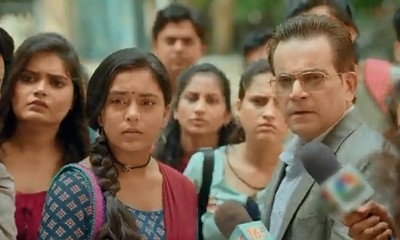 Your favorite Indian television show Imlie is gearing up high voltage drama because the time has arrived when Aditya will finally announce Imlie as his wife.

So, the story takes a dramatic u-turn when Anu calls media in the college and defames Imlie’s character.

Imlie’s character assassination comes as a huge shocker to Dev but he fails to protect her.

Poor Imlie faces a tragic time when someone from the crowd throws black ink on her face.

However, this drama doesn’t go for long as soon Aditya marks his big bang entry to protect his lady love Imlie.

Anu smirks at her plot succeeding in ruining Imlie's image in the public but Aditya isn't ready to let this happen.

Where Aditya stops Imlie from bearing anymore, he finally announces her as his official wife, and this jitter everyone to the core like never before.

Aditya is ready to bear the after consequences of his huge revelation rather than letting media ruin Imlie's image.

So what will happen when Tripathis will confront Aditya and Imlie?