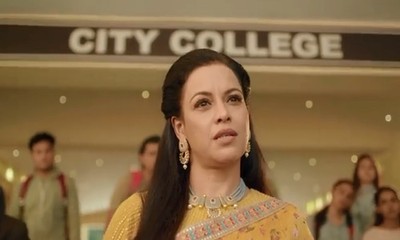 Aditya (Gashmeer Mahajani) and Imlie (Sumbul Touqeer Khan) are going to face one of the most terrible storms with Anu crossing the line in the upcoming episode of Imlie TV serial.

Satyakam compels Imlie to let Dev accompany her to the college and she should forgive him as he is genuinely guilty.

However, nothing works like such because when Dev drops Imlie at the college, the furious media traps Imlie and tortures her putting forth some typical questions.

This much isn’t enough that Anu takes Imlie on the radar only to defame her character questioning her relationship with Aditya.

Poor Imlie faces a terrible time as she can’t risk Aditya’s dignity by confessing the truth.

With Imlie’s silence putting her into tight spot, Anu smirks at her evil plan getting succeeded in a very drastic manner

Though a little hope is still alive that Imlie will take a strong stand for her self-respect but will things go in her favor,

Imlie: Kunal grooves soft side for Malini, duo gets closer a...

Imlie: Imlie stands strong against Anu and right of Meethi, ...